Millipedes: Did You Know? 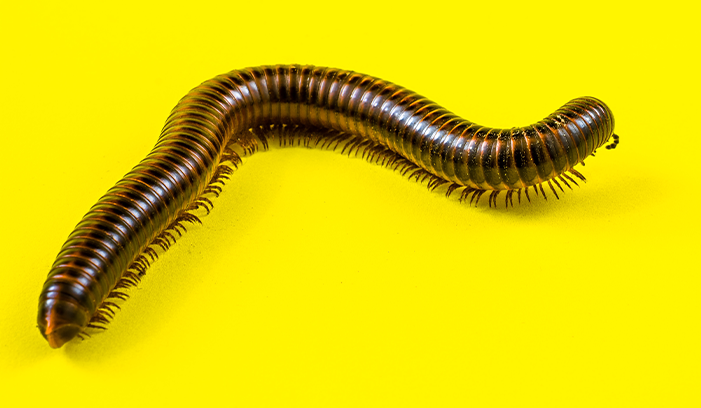 28 Jun Millipedes: Did You Know?

Posted at 21:43h in Millipedes by Western Exterminating

Despite their name, millipedes do not have a thousand legs—in fact, most species have fewer than 100. The millipede’s body is made up of multiple segments which contain two pairs of legs per segment. The exception to this is the first three segments, which only contain one pair of legs per segment.

With no stingers or pincers, the millipede’s first line of defense is its tough exoskeleton made up of chitinous plates. As a second line of defense, some millipedes can produce foul smelling odors or toxins through glands in their body called ozadenes. These toxins act as deterrents to prevent predators from eating them. Most species of millipedes are harmless to humans, but there are some species that can produce toxins which act as irritants when they come in contact with human skin. This can cause allergic reactions with some people, or cause itching and blistering.

There are over 12,000 known species of millipedes, many of which can be found in North America. They tend to live in places that are cool and damp, specifically in soil and decaying organic matter. Millipedes are nocturnal, so chances of stumbling upon them are pretty unlikely. However, millipedes become more active during the fall season, where it’s more common for them to make their way into basements and first-floor rooms. It’s speculated that this “migration” is caused by the millipedes urge to hibernate. Water levels in the soil also play a big role in these creepy crawlies showing up unwanted. Periods of extensive rain can force millipedes to seek new shelter.

There are multiple ways where you can reduce a millipede’s habitat without resorting to chemicals. This mainly requires you to be diligent in the upkeep of your yard. Proper mowing and edging of your lawn allows for moisture to dry more quickly. Another preventative measure you can take is to remove items from your yard that would be habitable for millipedes. These could include things like rocks, boards, thatches of vegetation, and any other material that could provide damp and sheltered hiding places. In the warmer seasons, water your lawn in the morning. This allows for your yard to dry during the day instead of remaining wet during the evening.

Although millipedes are generally harmless to humans, they can cause havoc on gardens. Typically, millipedes will feed on decomposing plant material and other dead organic material. However, when the millipede populace becomes too concentrated, they can feed on living plant matter like leaves, stems, and roots. If you have any questions or suspect that you may have a millipede problem, call Western Exterminating at 817-834-3121 to set an appointment for a free estimate and evaluation.